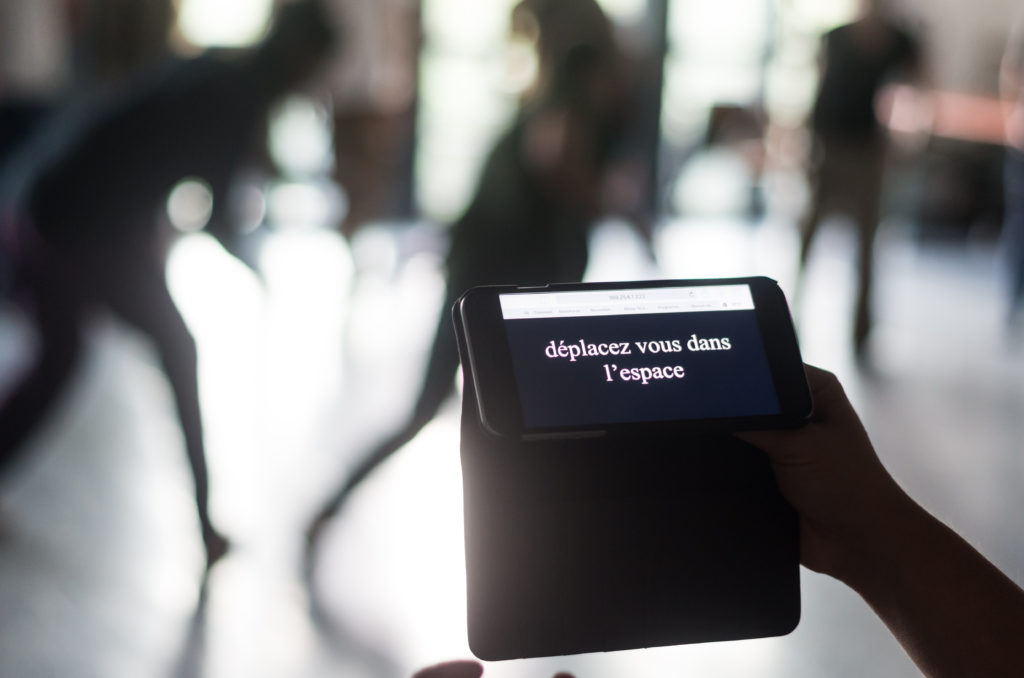 You are a Laban Movement Analyst, what does that mean? How can choreographers take advantage of this analysis? Is it a way to improve choreographic composition, or is it limited to archive dance?

The Laban Movement Analysis (LMA) is a system that allows us to observe, analyze, describe, generate,  and notate movement. It came from knowledge and experience built by Rudolf Laban and Irmgard Bartenieff as well as a lineage of Laban movement analysts. It’s a system that first came from dance, but lately was developed in further domains such as rehabilitation, psychology and so on. It looks at movement in terms of 4 main categories, Body (what is moving), Space (where is it moving), Effort (How is it moving) and Shape (in relationship to what?).

Rudolf Laban himself has observed factory workers’ Effort, to prove that by being more expressive (unlike his time’s Taylorism values), they become more productive. So becoming a Laban Movement Analyst is following a long training that allows you to acquire the skills to look at movement through that prism.

Choreographers are movement experts, because movement is what they manipulate, generate and shape. They can surely benefit from this system.  They can acquire the language to articulate what they are working on. LMA can be an efficient tool for them to describe more precisely movement they want to produce. That being said, we know that choreographers like to invent their own systems and frameworks (cf William Forsythe’s improvisation technologies or Anne Theresa De Keersmaeker spatial patterns). They could be resistant to apply the LMA system because they can see as narrowing down their possibilities or prescribing their creative space since it includes predefined labels for specific movement or qualities. I believe that choreographers should choose to apply such a system if it serves their creative purposes and if describing movement is of their interest.

For archiving dance, most of what is used is Labanotation that has the same roots as LMA, but a deeper focus on notation of Body in Space. Not so much Effort or Shape. Also, the notation uses symbols, whereas LMA uses mostly words, and maybe some Labanotation symbols when Motif Notating (Motif being a quicker more schematizing notation than Labanotation).  In that sense, Labanotation is truly developed and used for archiving dance. It is a long process but it builds an important body of knowledge out of dance making.

In conclusion, I don’t see how I can conclude for choreographers that they should use LMA or Labanotation. I can only say, that the tool itself is powerful in that it allows precise use of language and symbols to describe movement. But that it is a tool, and a tool can only improve choreographers’ practice if they are interested and if they have a need that the tool fulfills.

What is the interest for you to use new technologies with dance, or to develop technologic device suitable to dance ?

There are multiple reasons why I am interested in developing and using technologies in dance.

First because dance is one of the artistic fields that lacks tools to archive it but also to support the creation process.

Second, because dance is an interesting test bed for developing technologies that include the body in an innovative and more human way.

Third, as a choreographer (in addition to being a researcher) I am interested in understanding the creative potential of technology in an embodied context such as dance making. Does the technology play the role of a partner or a simple tool? Is it only an engaging way to design interactive sets on a dance stage, or are we creating dancing agent?

Fourth, movement is somehow still a mystery, and working on technology with dance allows to better advance our understanding of what human movement can achieve in expressivity and creativity.

Fifth, Digital technologies are a massive part of people’s lives nowadays; they become ubiquitous also in creative works. I believe that there is a great opportunity to design with and for artists, digital tools that accompany their work. I like to engage artist in thinking about what these tools need to look like.

In a conference, you explain that with videos and technological device dancers are able to correct themselves and to have direct feedbacks. To what extent do you think it can support the direct feedback choreographers are making to their dancers?

Video is used in dance to store/archive the dance rehearsal and the final product so that dance practitioners can come back to it, either make corrections or have feedback on what they do. Usually, in the dance rehearsals context for example, this feedback process is done with the dancers and the choreographers. Both take a look at the video and comment on it. Depending on how collaborative is the making process and how much the dancers participate in generating movements and concepts, the dancers or the choreographers or both can comment on the feedback. The same thing happens with technological devices allowing visualizing or sonifying — or more effects on– movement. They can be interesting and useful for both the dancers to have a feedback on their movement or to the choreographers to have a feedback on their choreographic idea and how the movement produced (visualized or sonified) serves it.

Why does it make sense to create links between scientific and experimental research and dance ?

I believe that we can learn a lot from the arts and when doing research on movement, dance is a great case study to understand expressive movement. For example, there are many studies in neuroscience and cognitive science about movement and brain that look at the skills built in dance.

The same for people interested in building body based technologies. Dance allows us to build a better understanding of the body and its creativity.

I am interested in dance within my academic endeavor not only as a case study but as a subject, a method, a mean and an end. I produce dance that reflect my research practice and I produce research that reflect my art practice. I learn from making dance, and that allows me to build knowledge about dance but also about humans. So I don’t separate scientific and experimental research from my art practice.

You were part of the project Moving Stories, what was it? Can you explain us what the main idea was?

MovingStories was a project initiated by Thecla Schiphorst. She was one of the developers of LifeForms, the system for choreographic support used by  Merce Cunningham. She is a dance practitioner, artist and Laban Movement Analyst. She received a major grant from the social sciences and humanities council in Canada to create MovingStories. We worked on integrating LMA as a tool for observing dance in interactive technologies and applied it to support digital arts (augmented dance, digital performance, digital art and interactive installations). I worked with Thecla for 2 years in Vancouver and we produced multiple dance pieces and papers using LMA to build embodied interactive technologies in dance.