Interview of Jean-Marc Matos: How to integrate technologies into choreographic creations?

Here is an interview of Jean-Marc Matos, choreographer and co-artistic director of the dance company K.Danse. Graduated in engineering from INSA, the choreograph talks about his interest in highlighting the meet between bodies and new technologies. 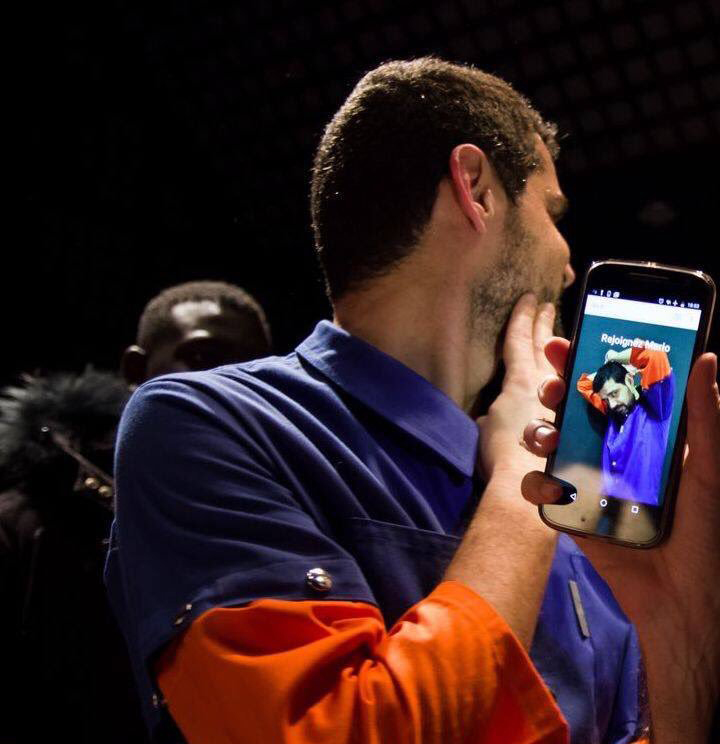 You are a choreographer and you are especially interested in pieces that involve new technologies: why is such an interest?

I am interested in the philosophical, economic and political impact of digital technology on society, and this contemporary questioning informs the quest for a meaningful relationship between dance and new media. Ever since I started working as a dancer and a choreographer, I have been experimenting with digital technologies to see what they can bring to the art of choreography making. I could summarize this life long passion by the following question: how can dance merged with digital technology help the process of re-embodying a disembodied body? I like the idea of extending, through interactive relationships, the substrate of the body itself and the imaginary, both capable of integrating new prosthesis and expanding further more the sensory and symbolic quest towards an understanding of the world, while inscribing our own mystery in it.

How do you associate new technologies and dance?

I develop a contemporary movement language by the dialectic confrontation between the physical body (lived, experienced) and the visual body (seen, virtual). Via an investigation with a large variety of interactive digital technologies (mobile phones, reactive clothing, physiological sensors, optical tracking sensors, body sensors, online telepresence, etc.) the performances I produce with the K. Danse Company question the borders between fiction and reality, the social construction of the body, and the psychological structures in human relationships. I have been associating digital technologies in various ways: computer aided composition, staging of man-machine relationships, perceptual augmentation of the senses, dynamic poetic environments, confrontation with artificial intelligence, etc.

I also continue exploring choreographic composition and its links with computer sciences. Today, I am working on the staging of interactive dramaturgies, in particular through participatory performances, which question the relationships between audiences, performers and environments (see examples: Metaphorá, Narcissus Reflected, BodyFail, RCO).

What tools do you use? How new technologies offer a new way to perceive movement?

Amongst several ways digital technologies can expand the perception of movement:

How could a choreographer take advantage of new technologies in the field of dance or other forms of living entertainments?

They are several ways… First, by linking an artistic approach with technology development: on one hand the artistic design can inform technological development (choreographic tools can be used for the design of technology). For example, in-depth analysis of compositional tools can provide novel directions in the understanding of movement analysis and whole-body interaction.

On the other hand technology design can inform artistic development: technology can provide choreographic and creative tools. Especially when technological environments provide and induce new conditions and novel constraints for the making of movement and choreography and for its perception from the outside. A choreographer can also devise choreographic composition and technology for movement analysis: tools for choreographic composition can be used for the thorough analysis of movement principles, by dissecting in separate units, for example, movement principles which have a lot of overlapping elements. This can be quite useful from the point of view of pedagogy. Highly innovative technology can also be made accessible for creative purposes. Another path would be to work on Gamification for learning pedagogical processes. This can be achieved through the description of the close relationship between – the movement principles used in the making of a performance – the choices of avatar visualizations – the programming of the behavior of the visual and sonic entities and – the rules added in the variable semi autonomy. Choreography can also be used for interactive design: fine-grain analysis and automated multimodal processing of highly diversified qualities of movement can allow users to gain an improved awareness of individual expressive movement qualities, resulting in an enhanced inventiveness of specific qualities in choreographic and pedagogical terms. Choreographic imaginary can also be useful for technology developers. Using technology with dance can provide new ways of disseminating movement and help attract new dance students (see examples with children in playful innovative dance environments). Several other aspects could be envisioned:

What are the new problematics that are brought by the insertion of new technologies in dance?

And above all, the possibility to trace down even further the mere poetics of dance… In all experiences mixing dance and technology, contemporary dance recognizes one of its initial vocations, always making the known world tip towards the unknown, traveling across the threshold of the unreachable, always leading towards new horizons for both the eye and the body.